Begins to paint more freely in the landscape

Exhibition: The House of the Stare, Utopia Art Sydney

Walking and painting at Garie Beach

Visits and paints at Badja, a very high cold wet valley in the Great Dividing Range east of Cooma

Returns to Yarramie (October) and paints a large number of gouaches. Fuelled by this experience returns to the Sydney studio on Parramatta Road and completes a large body of oils Realises that to go further into painting the landscape, he needs to live in it.

Visits Myall Lakes and paints a series of gouaches Rents old Coach House around the corner as a temporary studio

Begins extensive  exploration of the Braidwood area: the Shoalhaven at Bombay and Mt. Gillamatong, another distinctive landmark

Establishes a bush ‘studio’ under the trees on a hill at Bedervale. Works there for many months

Begins exploring and painting at Tantulean Creek, a narrow deep valley of small, cleared flats surrounded by steep forested ridges: more like Yarramie and very different to the open granite plateau of Braidwood

Participates in ABC filming for ‘Painting Australia’ program, featuring the Shoalhaven at Bombay Exhibition: Being at Bundanon, Mosman Art Gallery and touring

Screening of the series ‘Painting Australia’ on ABC Television S H Ervin Gallery survey exhibition, Journey through Landscape, provides an opportunity to see in one place the combined results of several years work on a number of related themes

Interviewed by Steve Lopes for article in Artist Profile magazine Artist Profile #6 published with JRW on the cover

Art Gallery of New South Wales purchases large work, A road a gate and a forest (from the Gateless Gate exhibition)

Presents to the House of Representatives Standing Committee regarding the Artist Resale Royalty legislation, the same day that the massive fires swept through Victoria

Visits historic outlaying property, Durham Hall. At the back of the old house, there are the remains of the original wattle and daub shack that was the first building erected c.1830s. In subsequent years, it was extended and converted into a large shed, held up and overgrown by an ancient wisteria vine. “Wandering around in the interior of the shed in the filtered greenish light I was struck by the piles of old tools, bottles and boxes covered in dust and grease and the fact that many of the tools’ usages were no longer comprehensible: a strange interior human landscape of visible metaphor for memory and history.”

Visits Mildura and Hattah Lakes in Victoria, the places where sculptor John Davis had found his subject.  The drought had broken and the lakes were full of water and bird life

Walking to the Big Hole (about 50kms south of Braidwood on the way to Badja), stumbles upon a clearing and some fragments of past habitation that are the stimulus for the next body of work, The Site Included in ‘Up Close and Personal: works from the collection of Dr Peter Elliott AM’,  S. H. Ervin Gallery

Many visits to the Fred Williams retrospective, National Gallery of Australia.  Also attended forte-pianist Geoffrey Lancaster’s talk about the similarities between Haydn’s music and Fred Williams’s compositional structures. Setting the germ of an idea for a body of work that would become Winter in the Fire Forest Video interview with Allens Arthur Robinson curator in the studio

Invited to work on a property called Doughboy Hill, results of which will be exhibited as next major solo show Hectic March: opening of terroir big land pictures 15 March, dedicated to the memory of Alan Sisley, at Orange Regional Gallery followed by opening of  new works ‘the end of all our exploring’ at Utopia Art Sydney 22 March; both exhibition ran to 27 and 26 April respectively

Welcomed in the New Year in Hoi An, Vietnam

Major solo exhibition: Here I give thanks… at The Drill Hall Gallery, Canberra, curated by Glenn Barkley and opened by Andrew Sayers

One month – end September to October – trip to South Australia, staying in Burra and Flinders Ranges. Particularly inspired by Red Banks Conservation Park near Burra and ‘Oratunga’ country in the Flinders Ranges. Major flooding of the Murray, Darling and Murrumbidgee river systems. Working towards a solo show at the new Utopia Art Sydney premises; first since 2014.

Returned to South Australia, via Stefano’s @ Mildura, briefly visiting Burra, staying one week at Oratunga near Blinman and then Adelaide to check out Art Gallery of South Australia’s gallery space for the Adelaide Biennial which will open 2 March 2018. Country very dry, almost no grass in Flinders, however, Burra and further south looked green and glorious.

Magnum opus, Burra Oratunga Suite, in the Adelaide Biennial ‘Divided Worlds’ at Art Gallery of South Australia from 3 March to 3 June. Off to Kyoto – first visit – surrounded by great food, gardens and shrines. Loved it. Back up to Sydney for solo exhibition, Pictures of Time Beneath, at Utopia Art Sydney opening  Saturday 7 April and then back to Adelaide and Burra, SA, on Friday 13 April for a works on paper exhibition at Burra Regional Art Gallery and artist talk about the genesis of Burra Oratunga Suite work in the Adelaide Biennial. Wynne Prize finalist with West of Wilcannia II, at AGNSW from 12 May to 9 September.

July: National Gallery of Australia acquires, Six Days in Bundanon and I Give Thanks to Boyd 2001, virtually 17 years to the day that I painted it!

A passage from Roger McDonald’s A Tree in Changing in Light has acted like a catalyst for my current work:

“We wrote philosophies, built faiths and took every kind of comfort from trees. They gave language to our existence as we put down roots, stretched our limbs, budded in infancy and were felled in old age. They were mute companions to our lives and worshiped beyond ourselves as the better part of balance and aspiration. They offered steadiness and long patience even as we failed in those. They were meeting points and sites of rough justice. They gave the idea and supplied the material for shelter. They offered an image of completion, which was an illusion, but it was enough. Theirs was a whisper in the wind to the human ear both tragic and hopeful. Civilisation grew from exploiting, destroying, venerating and looking back on them. Trees led us to ourselves and we stood against them trunk to trunk, arms upon branches, our thoughts tangled in the stars.

Because a tree bloomed seasonally we felt its body like our own. A tree stood still yet suffered change. A tree growing old grew down into itself. Trees could not heal wounds, only cover them up. Trees were magnificent survivors. Trees got used. Trees behaved erratically under stress. Trees strove to fulfill an ideal shape but were twisted out of it by pressures of existence.”

This year started with the fires which burnt all around us and so much of the east coast of Australia. It was a tough time. I have written in detail under NEWS. After a brief lull (which includes floods), COVID19 descended in early March and we have spent 10 weeks in isolation – not too hard to do in Braidwood. My exhibition, Fireground, opened on 4 July at Utopia Art Sydney 983 Bourke St, Waterloo Sydney 2017. Fireground #2 (for Matty H) 2019 was a finalist in the Wynne Prize, AGNSW.

Having re-read Eric Rolls A Million Wild Acres, we toured from Orange to the Warrumbungles, through the Pilliga and onto Mt Kaputur. Pilliga is magical, and we returned to Borenore near Orange, visiting Yuranigh’s grave. 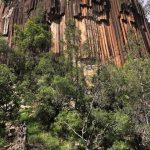 Visited Badja in the new year, travelling through burnt-out, stark country, some areas beginning to regenerate. Four major works – Hollow Tree 2001, Memorial Grove 2018, Fireground #1 (for Bruce R) 2019 and Fireground #5 (rebirth) 2019 – included in Tree of Life exhibition at S H Ervin Gallery, Sydney. Travelled to South Australia during May to give a painting workshop at Pitcairn Station, organised by Burra Regional Art Gallery, and then returning to Oratunga, Flinders Ranges for more painting and walking. Several visits to Badja (very wet) as the COVID lockdowns increased, and returned briefly to the south coast. Memorial 2018, from the Memorial Grove series, included in the Salon des Refuses at S H Ervin Gallery.